Last month, my family traveled from Houston, Texas to visit Amy's cousin, Laurie Brown Besselman, in Baton Rouge, Louisiana.  Amy wanted to visit Laurie and help her out.  In addition to her parents living with Laurie, she has a 4.5 year old son, Brown, and a 14 month old son, Ben, to take care of.  Trust me, I would not want to trade places with her!

While visiting Laurie, it just intensified my belief of the importance of family portraits in the house.  Laurie has an entire table in her living room that is nothing but photographs of her parents, children, and her growing up.  She also has several walls with framed photos of her beautiful children.  It is an illustrated history of her family.  What an awesome history it is!

While I was there, I was able to capture a beautiful photograph of 14 month old Ben with his grandfather, Judge Bill Brown.  After looking at this photo, the following thought came to mind.  These photos may be the most concrete memories that Ben will have of his grandfather.  How lucky I am to share these with Laurie and her son!  I am not trying to say that Bill is ready to kick the bucket, but unfortunately, age catches up with all of us.

Portrait of Grandfather and Grandson

After the kids ran outside for the Easter egg hunt, Laurie kindly asked me to take some photos of all five cousins on the couch in the dining room.  I know the phrase is cliché, but it truly was like herding cats when every toddler is under the age of 5:  Brown-4.5 years, William and Audrey-3.5 years, Amelia-2 years, Ben-14 months.  Ordinarily, I would have used a tripod to take the photos and then try to splice and puzzle them together in Adobe Photoshop.  But since I did not have a tripod, I had to use the "Align Layers" feature in Photoshop to make the magic work. I also would have used some flash modifiers instead of on-camera-flash, but since this was an impromptu shoot, I had to bounce the flash off of the ceiling.

These are the five photos that I had to start out with.  As you can see, each photo had their pluses, but they are not good photos individually.

This is the final composite image after several hours of Photoshop work!  I think it came out really well.  Hopefully, I will be able to take a similar photo of all of the cousins (next time including Emmy and Evelyn) when they are older throughout the years!  I am sure these photos will bring back lots of memories and stories for the cousins. 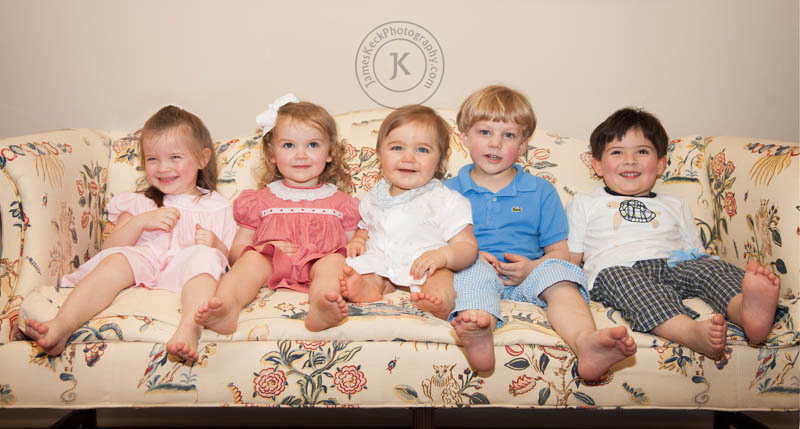 Portrait of Smiling Group of Toddlers on Couch-6